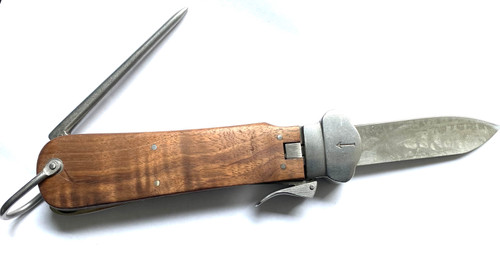 One of the most recognizable gravity knives is the world War II-era Flieger-Kappmesser (Translated: Flyers-cutting knife), telescoping gravity-propelled locking blade. First produced in 1937, the often so called Fallschirmjägermesser was initially issued to German flight crews and paratroops, primarily for the purpose of cutting a trapped parachutist from his rigging in case he landed with a tangled parachute, or became entangled in trees or in the water with the shroud lines. The spike was used to untie knots while packing the parachutes. Luftwaffe air crew members used the knife to cut themselves out of their harnesses or cut through the aluminum hull of the aircraft after a crash landing.